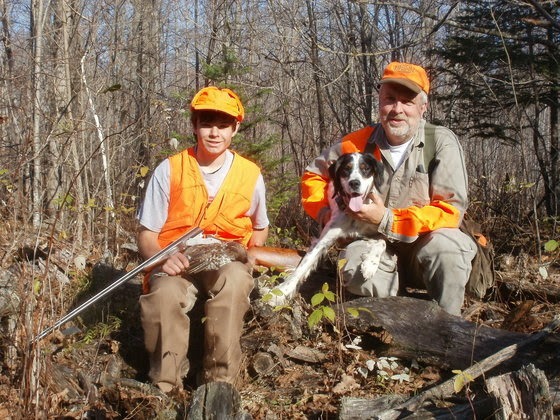 It’s September, the leaves are turning and there is a chill in the morning air and if you’re looking for a good excuse to get outdoors and out of town here is a perfect one: grouse hunting.

Never tried it? Not sure how to go about it? Well it’s very easy to learn, you don’t need any expensive gear or lots of money. There’s still time to get ready for the ruffed grouse hunting season that opens on Saturday, Sept. 15 – actually from where I write in northern Minnesota some mark the opener as a major holiday!

The ruffed grouse is considered the “king of game birds” because it’s a challenge to pursue, a thrill to witness on the wing and the ultimate wild game entrée when served.

Volumes have been written and hours spent debating the merits of this bird as the ultimate quarry: They are native here in Minnesota, all of our ruffed grouse are wild and free-range, and it’s nearly impossible to release them from pens or raise them on a farm with any success. They are fast and they’re wary (mostly). Locavores like the idea that you can’t buy grouse at the grocery store: You have to venture out and kill them yourself.

Minnesota is the top ruffed grouse-producing state in the lower 48 and we have millions of acres of forest land that you can explore.  With about 11 million acres of public land, you could hunt your entire life without ever having to ask permission to hunt private land. Public lands offering suitable grouse habitat may include DNR wildlife management areas, state forests, much of the land in the Chippewa and Superior national forests, and many acres managed by northern and central Minnesota counties.

The DNR website has information and printable maps of more than 50 ruffed grouse management areas specifically managed for the young forest habitat that grouse and woodcock prefer. You can find them at mndnr.gov/rgma. Just click on an area near where you want to travel and a map will come up with aerial imagery, trail locations and directions on how to get to the site from the nearest town. The DNR website also shows locations and downloadable maps for 630 miles of hunter walking trails – many of which are cut through grouse habitat.

Ruffed grouse can be found in just about any of Minnesota’s forests, but a hunter would be well-advised to focus on mixed forests (containing both deciduous and coniferous species). Areas with an aspen component typically have higher densities of ruffed grouse. Also focus on areas where you find mixed ages of trees (such as young sapling-size trees near larger older trees). Grouse will use these different ages and sizes of trees at different times of the day or year.

Grouse often hide in the thickest vegetation – we joke that if you trip in good grouse habitat you won’t hit the ground because the dense growth will hold you up.  Though harvest of a grouse is necessary if you want to eat one, there is much more to grouse hunting than just putting a meal on the table. Surveys of our hunters show that many enjoy it because they find it a relaxing means of getting closer to nature and they like being out in the autumn woods. They like testing their skills and reflexes. People also like it because it gives them time to reconnect with a friend or relative, maybe the parent who took them Up North and showed them the lakes and woods long ago. To be successful it requires both patience and quickness to get your gun up and your eyes fixed on a speeding blur disappearing through a jungle of undergrowth.

Interested? All you really need is a hunting license, sturdy footwear, a shotgun and a box of ammunition. When checking new areas it’s smart to carry the right paper or digital maps and it’s always smart to bring along a GPS, compass or phone with GIS capabilities. If you have questions or want additional tips, you can find more on social media or the internet on websites like the DNR grouse hunting page at mndnr.gov/hunting/grouse.

Chamber Members can get their news, sales and announcements on our website for free.  Click here for more information on joining the Park Rapids Lakes Area Chamber of Commerce & Tourism.