Walleye opener weekend 2022 went as many predicted with some anglers catching fish while others did not. 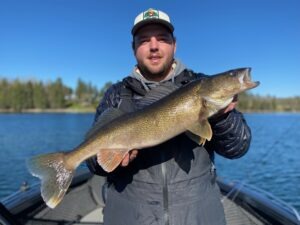 Water temperature is playing the most crucial role right now with some lakes measuring below 45-degrees while others surpass the 50-degree mark. Shallow water was key, no matter which species was targeted. 2-10 feet were the resounding depths coming from anglers who were successful. Jigs and spot tail shiners were the most effective presentation for walleyes, though finding that particular bait from retailers proved challenging as the weekend progressed. Many anglers encountered northern pike and bass while targeting the shallow water walleyes. The most consistent bite right now is for those who are concentrating on panfish. Crappies and sunfish have been very active in shallow, secluded bays and channels due to the warmer water temperature.