Deer  facts, straight from the Minnesota Department of Natural Resources: 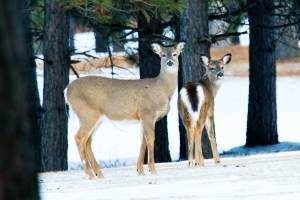 There are nearly 500,000 firearms deer hunters in Minnesota.
Last year, 35 percent of Minnesota firearm hunters successfully harvested a deer. About 53 percent were antlered bucks.
70 percent of Minnesota’s firearms deer harvest typically occurs during the first three or four days of the season.
The average hunter spends five days afield during Minnesota’s firearms deer season.
The highest deer harvests occurred during the early to mid-1990s and from 2000 to 2008. From 2000 to 2008 the harvest topped 200,000 deer each year. The high harvests in the early 2000s occurred at a time when the overriding philosophy was to reduce the deer population so it wouldn’t grow out of control and to address certain environmental, economic and social concerns. Harvests in the 1970s never topped 100,000, while harvests in the 1980s were under 150,000. In 2017, the harvest was just over 197,500.

In total, about 666,000 deer hunting licenses and permits (all types) were sold in 2017.
The three primary types of deer hunting seasons are firearms, muzzleloader and archery. Firearms season opens on Saturday, Nov. 3; muzzleloader on Saturday, Nov. 24; and archery season opened on Sept. 15.
The DNR Information Center received over 4,600 inquires via phone and email the week leading up to last year’s firearms deer opener. The majority of the questions were related to the upcoming deer season.

The three most common factors in hunting-related firearms incidents are careless handling, not knowing the safe zone of fire and not being sure of what’s beyond the target.
The three tenets of safe firearms handling are: Treat each firearm as if it is loaded by keeping your finger off the trigger; always control the muzzle of your firearm; and be sure of your target and what is beyond.
Since 2011, the DNR’s 4,000 certified instructors have provided firearms safety training to 177,453 students.

The DNR is entrusted to manage the deer herd on behalf of, and for, the benefit of all Minnesotans.
The DNR recently completed a strategic statewide deer plan to guide efforts related to deer over the next 10 years.
Hunters help manage deer populations, and hunting also is a tool used to control deer diseases, including chronic wasting disease.
Opinions on how deer should be managed are diverse, and the DNR values all opinions. Deer population management affects many other natural resources.

More information on deer hunting can be found at mndnr.gov/hunting/deer.