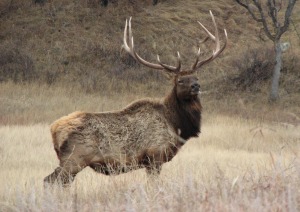 “Minnesota’s elk range in northwestern Minnesota has three herds with a total of 97 elk, according to the annual aerial elk population survey completed by the Minnesota Department of Natural Resources in Kittson, Marshall and Roseau counties.

“People often are surprised to learn we have wild elk in Minnesota,” said Doug Franke, Thief River Falls area wildlife supervisor. “As biologists, our annual elk surveys are one way we collect information we can use to manage these large and often elusive animals.”

Year-to-year, the survey results vary depending on the movement of the Caribou-Vita herd that travels back and forth across the Minnesota-Manitoba border. Meanwhile, the smaller Grygla herd in Marshall County remains at low numbers.

“We continue to be concerned about low numbers of elk in the Grygla herd, which has not been hunted since 2012 and remains below our population goal,” Franke said.

In Marshall County, observers counted 15 elk in the Grygla herd, down from the 17 elk counted last year and 21 elk in 2016. The current population goal range for the Grygla elk herd is 30 to 38 animals.

Another elk herd, the Kittson-Central herd, is located near Lancaster in Kittson County. Observers counted 75 elk compared to 61 elk in 2017 and 52 elk in 2016. The current population goal range for this herd is 50 to 60 animals.

Aerial surveys are a snapshot in time, meaning they are only an estimate of the population, not an exact number. The DNR counts elk only on the Minnesota side during its aerial surveys.”

Click here to read about the herds at the border and continuing research.