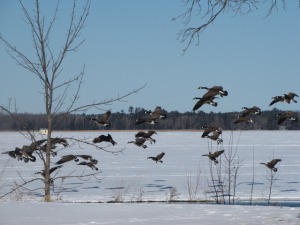 From the March 1st Press Release:

“The deadline for anglers to remove fish houses from lakes in Minnesota is approaching quickly, according to the Department of Natural Resources.

“With the recent snow and a forecast that calls for warmer weather, travel conditions on lakes may be difficult,” said DNR Conservation Officer Brent Grewe, who patrols the Minnetonka area. “But anglers are responsible for removing their shelters by the deadline, so they should plan ahead and make sure they’re able to do so.”

Fish house owners also should be cognizant of taking trash off the lake – whether it’s theirs or was left by someone else. “Minnesota’s lakes are among the best in the nation and it’s up to each one of us to do our part to keep them clean,” said Col. Rodmen Smith, director of the DNR Enforcement Division.

If shelters aren’t removed by the deadline, owners will be prosecuted and structures may be confiscated and removed, or destroyed by a conservation officer. After the deadline, shelters may be on the ice between midnight and one hour before sunrise only when occupied. They may not be left or stored at public accesses. As they venture out, anglers always should keep in mind that ice conditions may vary widely and that ice is never 100 percent safe.