Now that we’re knee-deep in ice-fishing tournament season, how about a look back to when it all began…

Fishing contests are a long-held tradition in Park Rapids that started in 1915.  The first official contest was established by Earl Fuller of Fuller’s Hardware (which turned into Fuller’s Tackle Shop in 1930).  Earl started the contest when he saw the excitement generated by fishing and immediately recognized an opportunity to draw tourists to the area.  In 1980, Mike Gravdahl spoke to Earl’s son Jerry Fuller for the Park Rapids Enterprise’s Centennial Edition.  Jerry painted a vivid picture of tourist fishing in 1915. 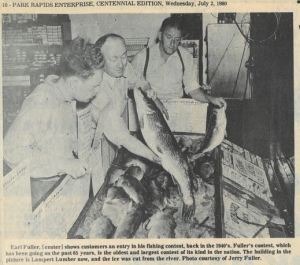 “When he decided to promote the idea, fishing was a gentleman’s sport.  These early fishermen were like the fisherman of today who make trips to the Arctic—those who had the money and wanted to fish where the fishing was best.  Dad would meet many of them at the train depot and take them to the resort they were to stay at.  The fish to catch were trout, musky and bass in that order.”

When the contest at Fuller’s first started, the fish were kept on ice cut out of the river in the front store window.  Fuller’s Golden Book was a record of the largest fish brought in that year along with ads from the Park Rapids area.  It was a powerful portable tool that fired the imaginations of sportsmen lucky enough to snag a copy and dream of fishing in the Nations Vacationland. 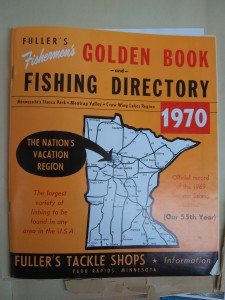 Obviously, fishing wasn’t only for sporting tourists it was a major source of food.  The 1917 – 1918 Fishing Regulations (as reprinted in the Centennial Edition of the Park Rapids Enterprise) reflected the time.  Fishing limits were set at 15 a day for walleye and bass, but you could catch 25 per day of all other fish species.  At the time, the most prized fish were Trout, Muskies and Black Bass.

Another early fishing contest was written up in the St. Paul Pioneer Press in 1922 and it wasn’t even for the biggest fish.    Writer Al Evans broke the news, “Park Rapids is home of the most interesting summer bait casting tournament in Minnesota and the big event for 1922 is scheduled for Sunday, July 16.”

If you’ve ever taken pride in your casting ability, you would have been right at home in the Park Rapids Bait Casting Club in 1922.  The casting tournament was held at the Fish Hook River near the Municipal Beach.   It was covered by the Hubbard County Journal and their results show that men and women competed in the same events.

There were many different games including an accuracy tests with varied weights, a miss-and-out elimination, casting at a series of targets and novelty competitions like casting blindfolded.  There were both individual entries and teams.  The first prize for the team division was a silver trophy sponsored by Walker Rod and Gun Club.  For 1922 it must have been quite the spectacle.

Fishing methods, equipment and fashions have changed many times in the 103 years since Fuller’s Tackle Shop put out its first Golden Book, but fishing tournaments will always be a part of our Minnesotan identity.   The next time you step onto the ice or fire up the Evinrude know that you’re carrying on a proud tradition that has served the area well over the years.  After all we are the land of 10,000 lakes and someone has to fish them. – Erin Cox