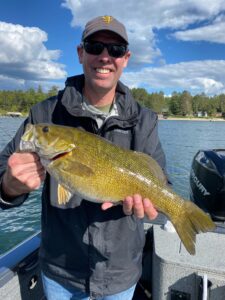 September and October are some of the absolute best months of the year to catch fish of any species in the Park Rapids area.

With cooler nighttime temperatures and declining water temperatures, the fish are feeling winter on the horizon and are starting to feed heavily. Most notable are the bass. As the earth cools down, especially following the first hard frost, amphibians begin to inhabit the water more than land. This provides an excellent food source for shallow water dwelling bass and can be absolutely incredible fishing! Start in depths less than 6 feet deep. Walleye anglers are finding good action in the 18-22 foot range and though big minnows and crankbaits often shine during this period, nightcrawlers are still catching a ton of fish. Northern pike have been prevalent hovered over deep humps and drop offs, as well as shallower healthy green and existing weed beds. Muskie anglers are finding fish along primary drop offs and especially trolling along those breaks to cover water. Panfish anglers have been delighted by both crappies and sunfish. Many of the sunfish have gravitated toward shallow water, especially lily pad edges, though on certain lakes the sunfish and crappies are suspended over deep water basins. Trust what your marine electronics are telling you to find those fish.

*Also, don’t forget that smallmouth bass are catch and release only following the 9/12 closure of the harvest season.

For information on local lakes or to schedule a fishing excursion, contact Jason Durham of Go Fish! Guide Service at 218-252-2278 or visit go-fish-guides.com