Fishing in the Park Rapids area has been very good! 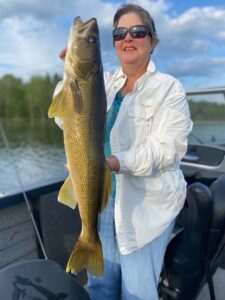 Water temperatures are in the low 60’s on big bodies of water while smaller lakes offer surface temperatures in the high 60’s. Walleye action continually improves daily. Minnows are still producing but the leech and crawler bite is very good too. 13 feet has been the magic depth on most lakes. Crappie have finished spawning and are prevalent in 6-8ft around new weed growth. Sunfish are spawning on smaller lakes and it’s important that anglers allow some of those fish, especially the largest, to reproduce. Smallmouth bass are also spawning while largemouth have completed that process, yet are still in very shallow water. In other words, walleye anglers aren’t encountering many largemouth or smallmouth along the primary drop offs. The muskie season kicked off last weekend with some nice catches in the area. Muskie anglers reported the best activity in very shallow water. Northern pike fishing has been great in 15 feet or less. A jig and minnow, soft plastic swimbaits and spinnerbaits have all been good bait choices.