With a considerable amount of snowfall last week, everyone wants to know about the ice and travel conditions. 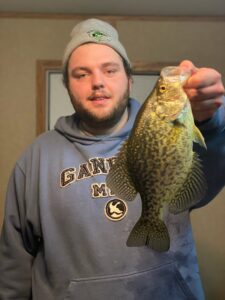 Though there is a lot of snow, anglers are still accessing the majority of the lakes. Ice thickness varies from 11-15”, so vehicle travel is possible on numerous bodies of water. Though flooding is happening in certain areas, many areas are not due to the “fluffiness” of the snow. Yet use caution, check the ice thickness frequently and bring shovels and tow straps just in case if venturing off from plowed roads.

Walleye have been biting well in the 18-25 ft depths along primary breaks and the base of drop offs. Panfish anglers have been doing best in shallow weeds during the day and in basin areas in 16-24 feet in the low light hours. Northern pike have been biting very well along weed flats in 8-14ft.

Be sure to get your ticket for the Park Rapids American Legion Community Fishing Derby February 5th on Fish Hook lake. Tickets are $40 and can be purchased through the American Legion 218-732-3360