Conditions for snowmobile riding in many parts of the state are as good as they’ve been in a long time, prompting what Department of Natural Resources conservation officers call the biggest number of riders in years to hit the state’s 22,000 miles of snowmobile trails. 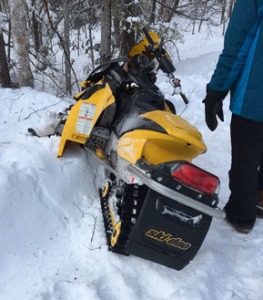 While zipping around on a sled is a great way to experience Minnesota’s snow-covered outdoors, Enforcement officials remind riders to leave the booze on the shelf or in the refrigerator until after they’re done riding.

Alcohol is a factor in more than 70 percent of snowmobile-related fatalities in Minnesota. And it isn’t just intoxicated drivers who pay the price for their bad decisions.

Earlier this month, Eric Coleman was sentenced to 12.5 years in prison for a tragic incident last year when the snowmobile he was driving struck and killed 8-year-old Alan Geisenkoetter Jr. Coleman, who was drunk and whose driver’s license was revoked when he crashed into the boy, had multiple previous DWIs in a motor vehicle. The incident prompted state lawmakers to close loopholes in the state’s DWI law.

“We hope the increased penalties for people convicted of operating a motor vehicle while under the influence will cause them to think twice before drinking and riding. But they won’t bring back Alan or heal the damage this senseless crash caused his family,” said Jen Mueller, a regional training officer in the DNR Enforcement Division and the agency’s Enforcement Education Officer of the Year. “There’s never an excuse to drink and drive and we have no tolerance for people who do it.”

The new law – Little Alan’s Law – went into effect Aug. 1, 2018. It means people convicted of driving while intoxicated – regardless of the vehicle they’re driving – lose their driver’s license and are prohibited from operating motor vehicles, including all-terrain vehicles, motorboats and snowmobiles. Before the law change, people convicted of DWI in a highway-licensed vehicle still could legally operate ATVs, motorboats and snowmobiles. The changes apply to violations that occurred on or after Aug. 1, 2018.

The DNR anticipates Little Alan’s Law will affect more than 2,000 people each month in Minnesota. But since the law requires a DWI conviction – and these cases take time to move through the court system – specific numbers aren’t yet available.