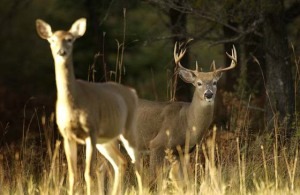 Photo credit goes to the Department of Natural Resources

The Minnesota DNR just announced that more deer licenses will be available this year.  More specifics from the Department of Natural Resources July 30th press release:

Additional deer hunting opportunities will be available this fall because numbers continue to rebound across the state and now many areas have populations at or above goal levels, according to the Department of Natural Resources.

“Deer populations have responded well to favorable winter weather and our generally conservative harvest levels in recent years,” said Erik Thorson, acting big game program leader for the DNR. “So we have been able to expand hunting opportunities once again in much of the state in order to reduce populations or stabilize growth.”

Mandatory testing for chronic wasting disease (CWD) continues this year: in the disease management zone (deer permit area 603) during all deer seasons; in most permit areas in southeastern Minnesota during the first two days of both the A (Nov. 3 and 4) and 3B (Nov. 17 and 18) firearm seasons; and in several deer permit areas in Crow Wing and Meeker county areas in north-central and central Minnesota during the first two days of the A firearms season.

Every year harvest regulations are reviewed, taking a wide variety of information into consideration. Wildlife research scientists use the previous year’s harvest data, winter severity, aerial survey information where available and other information to estimate late winter deer abundance in each permit area. These estimates are compared to established population goals for each area, and along with observations from DNR area wildlife managers, hunters, farmers, foresters and others, form the basis for final season recommendations.

“As part of our new statewide White-tailed Deer Management Plan, we are scheduling local meetings across the state for citizens, including hunters, to come and discuss deer hunting regulations and management with area DNR wildlife managers,” Thorson said.

The regulations for each of Minnesota’s deer permit areas are set to manage populations toward goals established for each area. These goals are based on information from the DNR and local citizens through a periodic public goal-setting process.

Hunters may apply using both their firearm and muzzleloader licenses. If a hunter is selected for both licenses, only one antlerless deer can be taken.

Deer hunting licenses, lottery applications and special hunt applications are available at any DNR license agent, by telephone at 888-646-6367 or online at mndnr.gov/buyalicense. Lottery winners will be notified in October.

Mandatory CWD testing of deer harvested within the disease management zone – deer permit area 603 – throughout all hunting seasons continues this year. Carcass movement restrictions remain in place until a test result is reported due to continued infection found in this area.

Hunter-harvested deer from permit areas surrounding two CWD-positive deer farms in Crow Wing and Meeker counties will again be tested for CWD this fall during the first two days of the A firearms deer season (Nov. 3-4), but this mandatory testing will be in smaller, more focused areas. Those areas are:

North-central (Crow Wing County area): Deer permit areas 242 and 247.
Central (Meeker County area): Deer permit areas including portions of 277 and 283 east of state highway 4, the portion of 219 south of state highway 55, and the portion of 285 north of Minnesota Highway 7.
No positive deer were found during the 2017 deer season and wild deer in these areas are not known to have CWD. Because disease symptoms are slow to develop, DNR conducts sampling for 3 consecutive years. This is the second year for these areas and further testing will determine if the disease has spread to the wild.

Additional maps and CWD sampling stations can be found in the 2018 Minnesota Hunting and Trapping Regulations handbook. Complete CWD sampling, testing and disease management information is regularly updated on the DNR website at mndnr.gov/cwd and details will be announced as they become available.

Hunters who harvest deer outside the state are reminded that they cannot bring whole carcasses of any member of the deer family into Minnesota. These animals include but are not limited to white-tailed deer, mule deer, black-tailed deer, elk, caribou and moose. More information is available at mndnr.gov/deerimports.