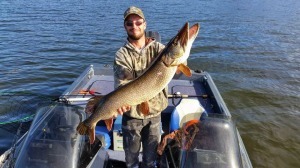 “Anglers and spearers pursuing northern pike this winter can prepare for new pike regulations that will be in effect for the spring fishing opener on Minnesota’s inland waters.

“Pike regulations remain the same this winter, with major changes coming this spring,” said Chris Kavanaugh, northeast region fisheries manager. “As anglers continue fishing for pike, we encourage them to get used to measuring their catches and even consider keeping some of the smaller ones in the north-central part of the state.”

The new regulations on inland waters will be in effect starting March 1; however, fishing for northern pike is not allowed on these waters until the fishing opener on Saturday, May 12.

Spearing season opened Nov. 15 and pike fishing remained open until Feb. 25, 2018. Current statewide regulations including the daily and possession limit of three northern pike is still in effect. So, too, are special and experimental regulations listed for specific waters in the 2017 Minnesota Fishing Regulations.

The new fishing regulations beginning in the spring take a cue from hunting regulations and will set up three distinct zones to address the different characteristics of pike populations in Minnesota.

“Anglers and spearers have an opportunity to use this winter as a transition period and become accustomed to measuring their catch before the new rules take effect,” Kavanaugh said. “We know many anglers already do measure fish, and spearers judge fish size, but we want to highlight the importance of those practices when it comes to northern pike.” 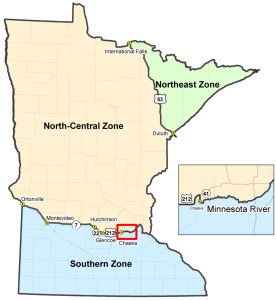 Pike zones begin this spring
When the new regulations take effect this spring, the majority of the state will be in the north-central zone where the issue is overpopulation of small pike. Anglers here will be able to keep 10 northern pike, but not more than two pike longer than 26 inches, and all from 22 to 26 inches must be released. Northern pike taken by spearing follow the same rules except one pike may be between 22 and 26 inches and one longer than 26 inches.

In the northeast zone, the new regulation will maintain harvest opportunity and protect large fish already present and anglers here will be able to keep two pike and must release all from 30 to 40 inches, with only one over 40 inches allowed in possession. Spearers also will be able to take two pike but only one may be longer than 26 inches.

In the southern zone, the regulation will intend to increase pike abundance and improve the size of fish harvested. Anglers and spearers will be able to keep two fish, with a minimum size of 24 inches.”

Stop in to the Tourist Information Center for an updated fishing regulations booklet or consult mndnr.gov/pike for more specifics on pike zone regulations.