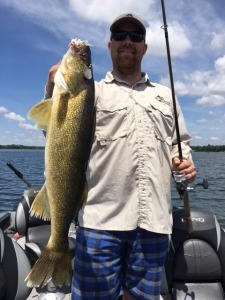 Well folks between the crappies, walleyes, northern pike and monster bass this last week in June has been fantastic. Large schools of Crappies can be found on the shallow Weed flats adjacent to their spawning  beds other schools of crappies can be found suspended over the deep water nearby as well.  a 1/16 ounce jig head tipped with a crappy minnow or a Berkley gulp Minnow  will produce fish depth ranges can vary anywhere from 8 feet to 20 feet. Walleyes are being caught all over the water column from shallow water flats in the 4 to 6 foot range weed edges in the 10 to 15 foot range or midlake structures and sunken island in the 35 foot range. By far the most productive Bait has been a night trailer or leach.  Northern pike are being caught on chartreuse bass spinner baits and or Rattle Baits like a rattlin rap  worked at medium speeds  in new weed beds found in the 6 to 10 foot range try to get the lure about halfway down while trolling or casting. I’ll real easy pattern for largemouth bass right now is to fish under docs or boat lifts or swim rafts. Using a black one 8 ounce jig head and a 7″ black Berkeley power worm in the black collar and 7 inch size will produce Fish just about anywhere. Big fish big fun.  Captain Josh Minnesota Fishing Guide Service 218-732-9919 or make reservations at www.minnesotaguideservice.com.